This challenge is two-fold. First, you have to design a hero. Then design a villain that has taken everything that has made that hero a hero and twisted it into some kind of evil twisted bastardized mirror world version. It's the latter I'm more concerned about, but a side by side comparison would be sweet. That is all, have fun.
Posted by Chris Gugliotti at 6:19 PM No comments:

Boss and Assistant: The Blacksmith & his Daughter 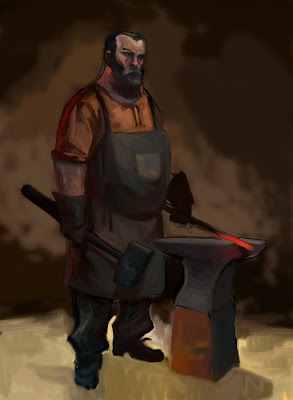 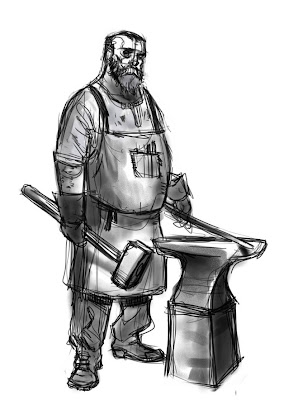 Word on the street is this guy's an underworld arms manufacturer.  Some call him The Blacksmith.   He's the guy that other villains go to get their crazy, diabolical weapons made. Need a spiked mace that leaks poisonous gas.  Go to him.  Need a gauntlet that also serves as repel line.  This is your guy.  Been following his trail for weeks now.  Not an easy find.
{I haven't done his assistant yet...but right now I'm gearing towards making that character his daughter.  Plan to paint it this week. Update to follow}
Posted by Jason Snair at 2:33 PM No comments:

Count Tiki and his Shrunken Head(color) 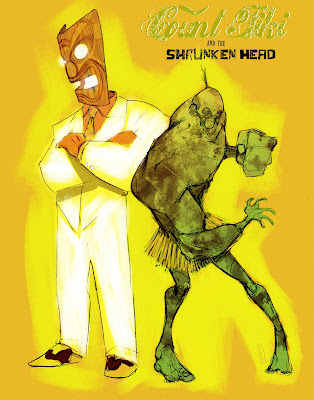 Posted by Chris Gugliotti at 6:36 PM No comments: 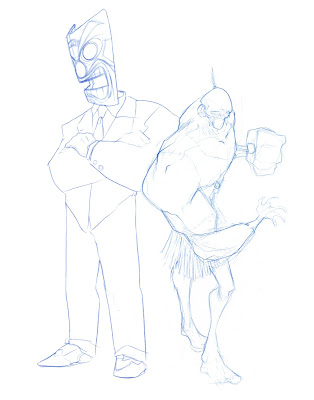 Posted by Chris Gugliotti at 11:26 AM No comments:

Next Challenge: Boss and henchman

For a long time now, We talked about doing a series of Villain characters. Something to compile into an anthology and to hand-out at a future Comic-con. We're thinking of doing some sort of case file concept, something that a generic super-hero, like say, a Bat-man, would have at his disposal. For a couple of years this idea has sat on shelf, both of us being too busy to get it going. But that's all going to change, because for the next few months all Artgasm challenges will be geared towards Villains.

First Challenge:
In honor of Labor Day --- Boss and Assistant.
Come up with 2 characters, a Boss and an Assistant. It's up to you what exactly that means. It could be evil business man and top henchman. Or it could be something completely out there. But... They need to look as part of the same visual world, so they need to have some sort of familiar relationship to each other. I'd also say that you'll need to show what their relationship is like. Is the Boss mean to the assistant? Does the Assistant secretly want to overtake operations? That sorta thing.
Posted by Chris Gugliotti at 11:23 AM No comments:

"Two men. One Space. Countless attempts to one up each other"
Why do this? It's simple. We're artists. We're not famous yet and we can't stop drawing. We're doing this in order to feed off of and learn from one another's, as well as other artist's, remarkable gifts. The concept is simple. Every week or so, a challenge will be handed out. And if you think you're up to it, make some kick-ass artwork.
Contributing Artists:
Jason Snair
snairjason@yahoo.com
Chris Gugliotti
www.chrisgugliotti.com
cgugliotti@gmail.com
Jay May
Want to join the fun? Want to compete? Want to comment on the art? Just email us!